For the guide many thanks EvoWind from NA S3

Hello everyone! I’m EvoWind from NA S3, After play Vampire for a while and many people ask me questions about how to build Vampire, i decided to write this vampire guide. 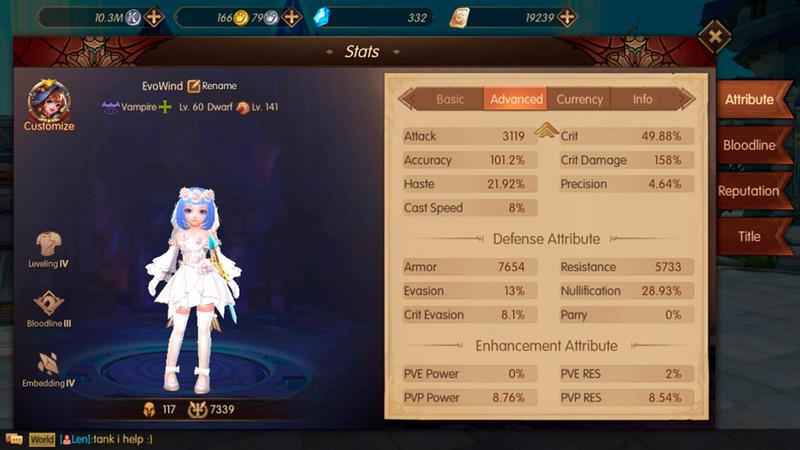 This game already released in China for more than a year, This guide will conclude my personal experience on Vampire and good guide in Asian server.

First, simplily talk a bit about pvp for vampire.

First of all, pvp in this game isn’t very important, not much rewards, and pvp stat and pve stats are totally different, so pvp is for the people that have enough gold to Enchant two set of gears.

For now Vampire is very good in big wars, like guild war and 20v20, but not very strong for 1v1 or small group fight, and assassins counter vampire very hard. if you go for pvp, you can mostly use same talent as pve but you need pick Field Doctor in Talent, which give you many crit resist to live longer against assassins.

There are two kind of Vampire build.

1. Healing Vampire, advantage of this kind of Vampire don’t need spend a lot and can also have “ok” heal ability, but the bad part is this kind of vamp have almost no dps, and it’s kinda hard to find a team as the dungeon getting harder.

2. Dps Vampire, this is what i focus on, advantage is have both high dps and high healing ability, but it cost a lot, so if you planning to play this kind of vampire, you need to consider about the cost before you play it.

For both kind of Vampire, the skill choice, skill lvl up rank, and Engraving are all same. The skill lvl up order should be Blood Boil > Life Feedback > SiphonSoul > Ghost Hands > Shadow Mend > Drain Life > Fade into Mist

Blood Boil is the most import dps and healing skill of vampire, and lifefeedback recover your mana and give bonus attack, so please lvl up those two skills first

Siphon Soul is instant group heal, and it also give shield , with very strong buff, so that skill is important too, and it is actually much better than the single target heal (shadow mend)

GhostHand is not only for dps, the important part of this skill is it give life drain buff , remember use Ghosthand before boss cast big skill.

For other skills maybe they are fine in pvp but for pve they are not very useful.

Why am i using so much control, because Vampire need more MANA! and i will tell you why in talent part. 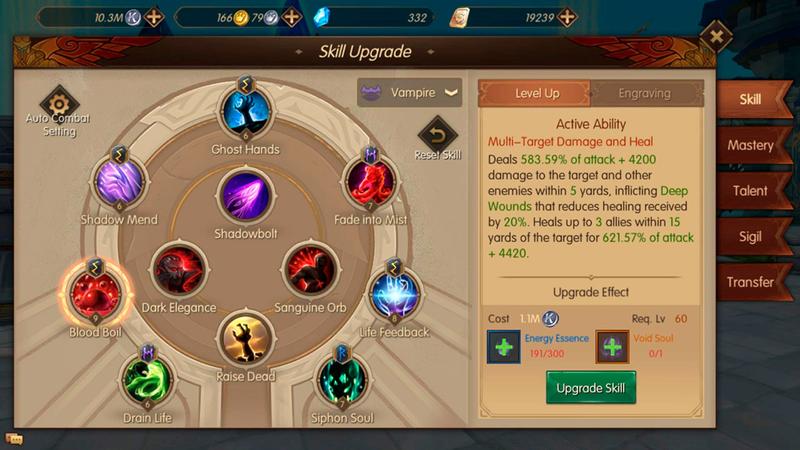 For Sigil and gems, both kind of vampire are almost same as well. crit and spirit are most important, Stamina is also good but the order is Crit rate>spirit>everything else. 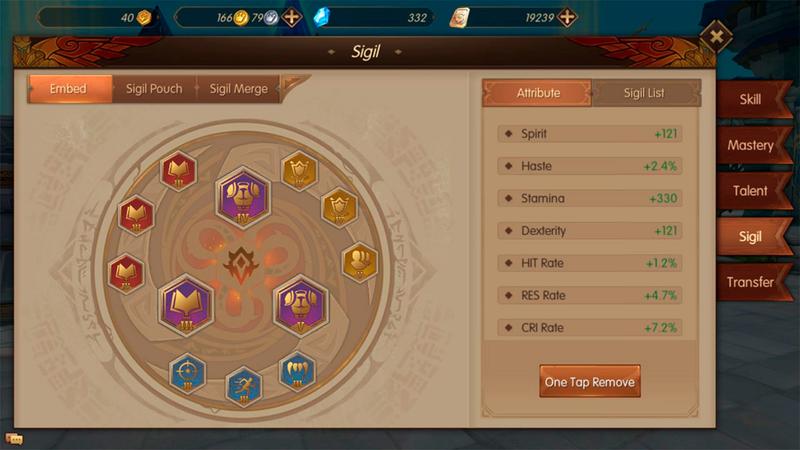 After talk about the same part of two kinds of vampire, now we can talk the difference of two kind of vampire.

Let’s talk about healing Vampire first, i don’t play this kind of vampire much so i won’t write too much about it.

Talent is in the picture, in Strategist we choose + healing effect and holy vigor, with both of them your healing power will be fine, and for reforge artifact you need focus on Mana Torrent, Bravery, Holy Grace, Chanting and Holy Vigor.

The advantage of this kind of vampire is that you can finish your build fast, and no need much gold. well, you can heal but have almost no dps. 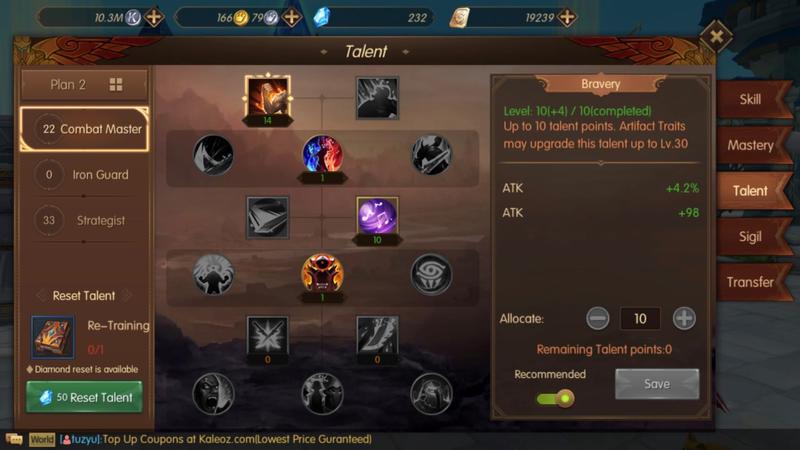 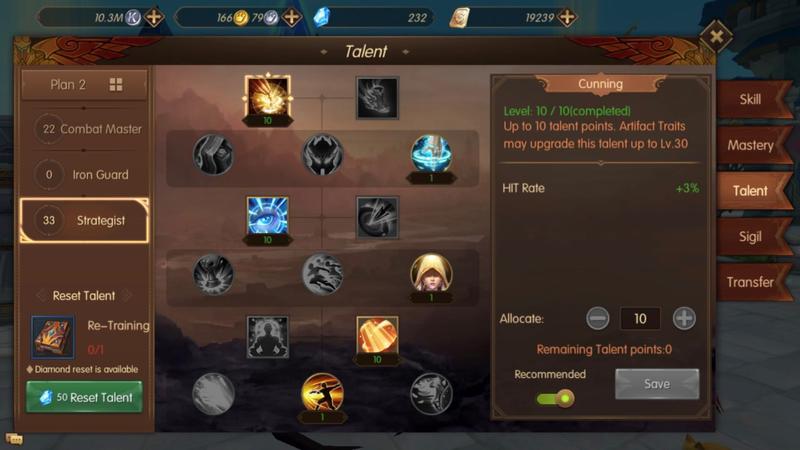 Dps vampire, as the name, you need stack up on dps stats, with the passive of vampire, you could heal more by increase your attack.

This kind of vampire need high magic attack and 5% precision, after you get those stat, crit dmg> crit rate > haste > everything 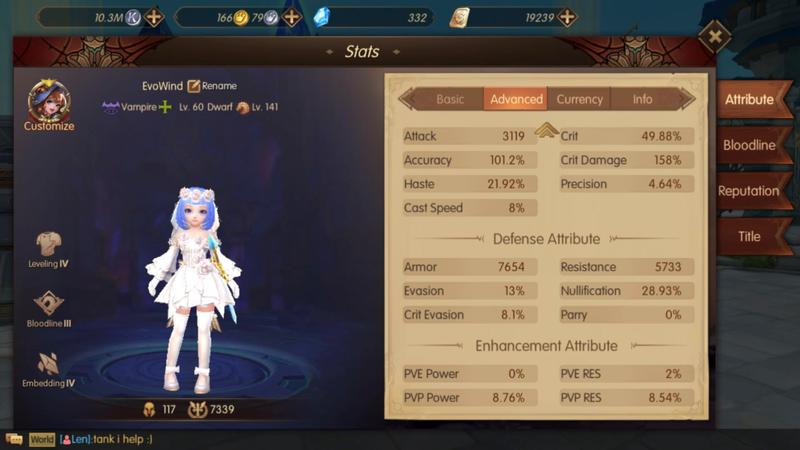 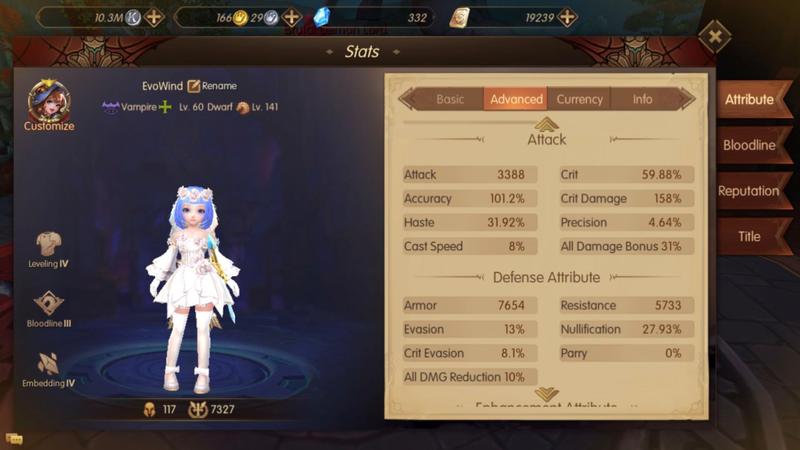 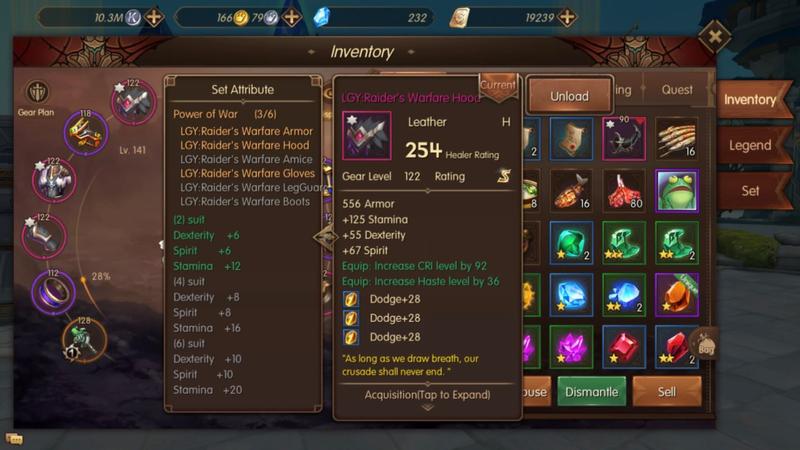 There are some people may ask, command legacy have 3 green stat, and Warfare set have only 2 green stat, why is Warfare better? after you upgrade warfare set to same gear level as command set, and you can add those green stat of each gear up, you will see the sum of them are almost same, but warfare set give so much more crit which is important for vampire

Talent of dps Vampire is below 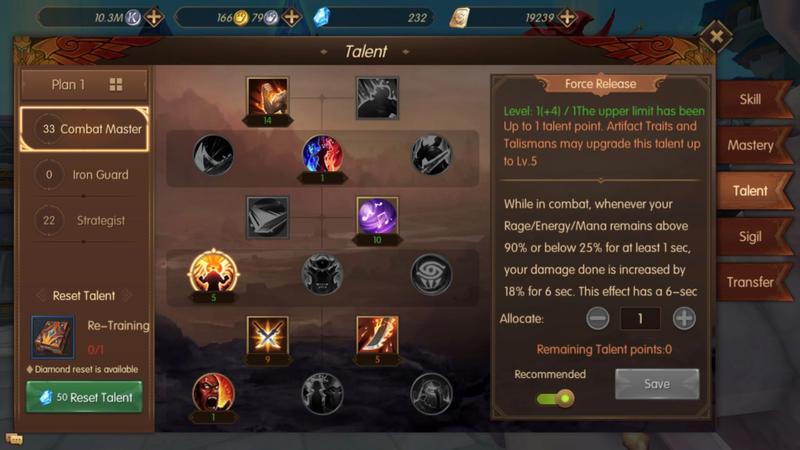 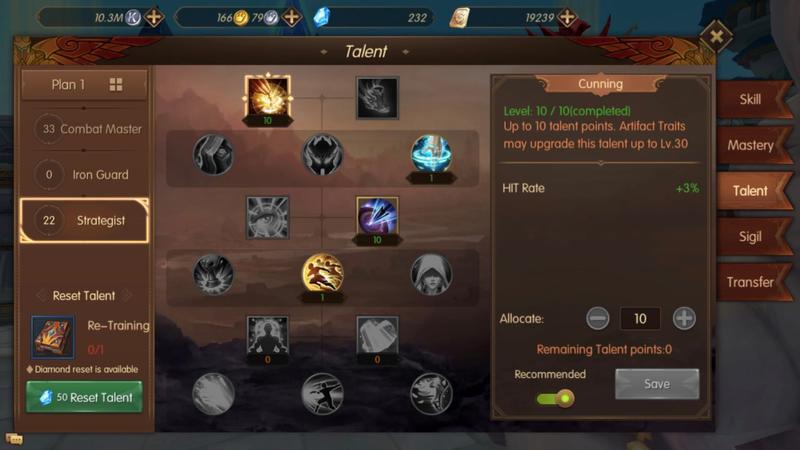 Now that’s why i choose many Control on Engraving, because with them i can have force release effect more than 60% of the time, which give me additional 18% dmg, mana torrent is good as well, you can choose your main reforce target on either of them.

For Mastery, mainly add Blood’s gift, cuz it buff your main skill, i’ve tryed second one too, heal effect are almost same, but dps only 50%-60% of thrid one. 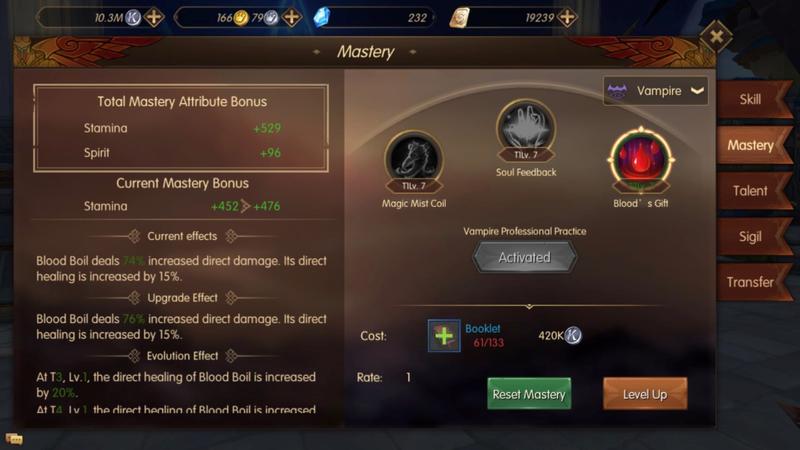 With my pic of overlord 6 time, i could do very good dps and heal as much as other healer. 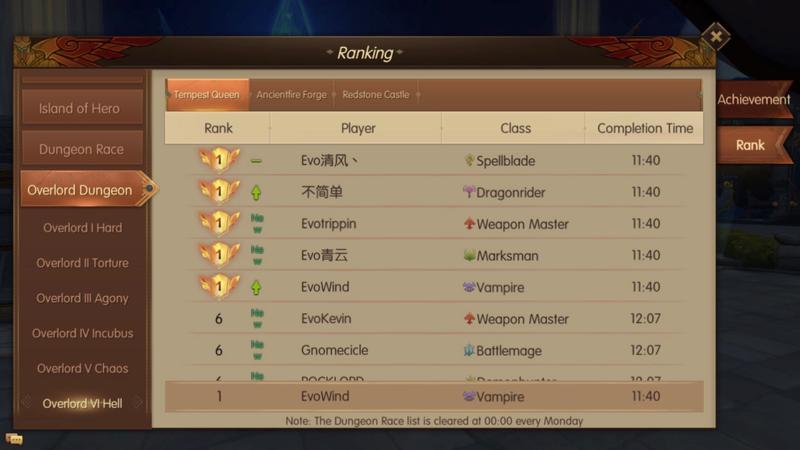 Also for the title, if you can afford, get summer fashion, its best title of current version. 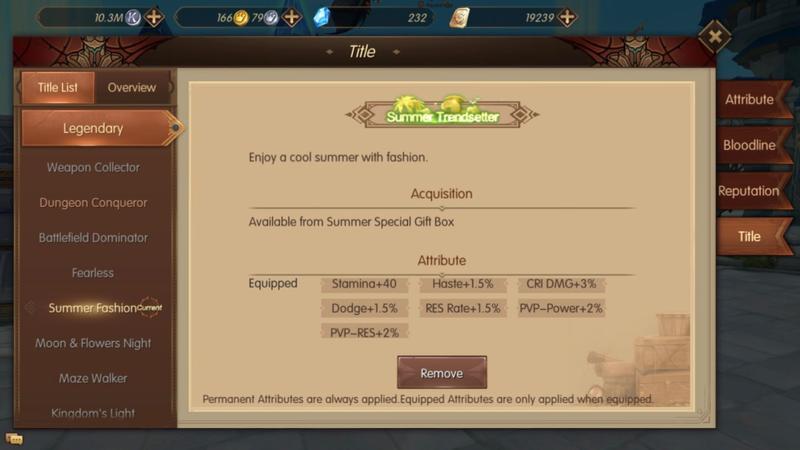 Also, please get a Lord mount if you can, which give 5% crit when you obtain lord mount for the first time, it is a lot! 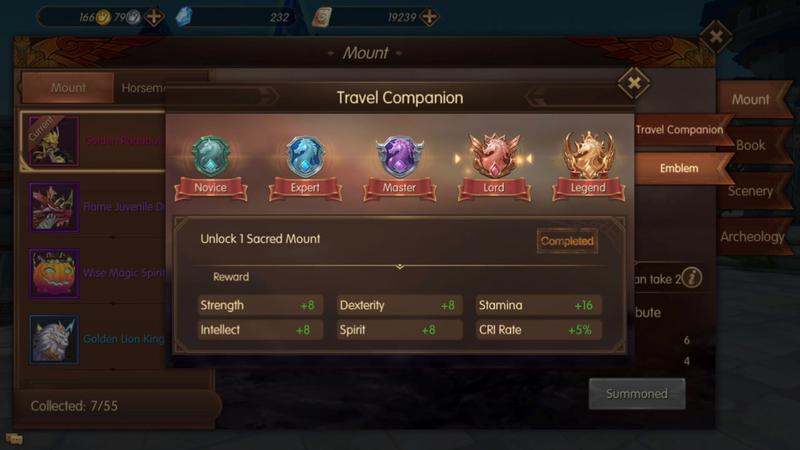 If you have other question, you are welcomed to ask me in discord @Evowind or ask me in game. Have fun on vampire!