When creating a character, the player must choose a nation and a career, the initial skills of the character and the beginning of the game depend on this choice. At the same time, the choice of a career and a nation does not in any way limit the player in further development, the player can learn to use the ships of other nations and learn the skills of other careers. 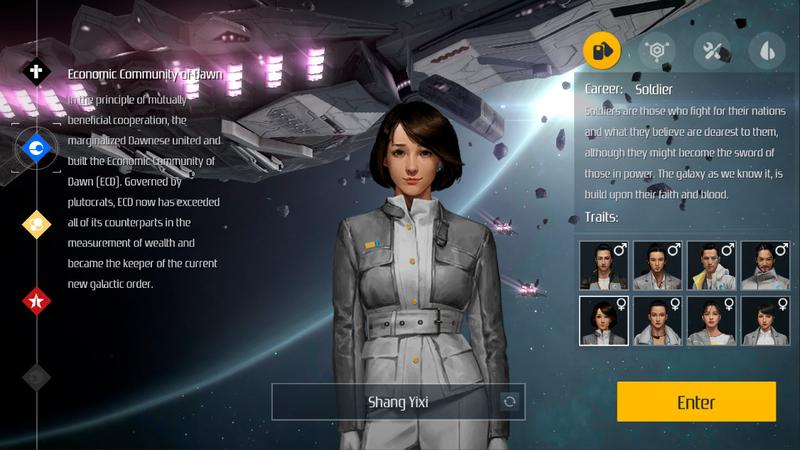 ECD ships are usually swift and agile. The combination of top-tier speed and the blaster weapon system creates the possibility to cause high damage at a close range.

NEF ships are known for their steady armor and shield. Combined with dead precision of the missile system, they are great for head on battles.

Ships of OE boast their advanced energy system which enables various shipboard devices to gain tactical advantages. They are mostly equipped with laser weapons, which deal higher damage the longer they fixate on a target.

RS ships may not impress at first glance, but do not under estimate them, as they weaving in and out of the battlefield with the long ranged railgun weapon system..

A career is another important choice when creating a character; currently 4 careers are available. Like nations, careers only affect the beginning of the game.

Soldiers start off with Tech in weapon enhancers and weapon production.

Engineers start off with Tech in energy rechargers and attachment production.

Scientists start off with Tech in shield rechargers and ship production.

Explorers start off with Tech in thruster enhancement devices and scanners.